‘No space’ in the Singapore media landscape

For all the talk of Singapore’s consistently unfavorable rankings in the annual World Press Freedom Index, the country’s media landscape can be best summed up in two words: unequal access.

Since time immemorial, there has been a caste system of press accreditation in the country. At the top are the Brahmins of Singapore Press Holdings (SPH) and Mediacorp, the solidly pro-establishment mainstream media (MSM) giants that still dominate print and broadcast media despite plummeting ad revenue and readership. At the bottom are the untouchables of, well, everybody else. Curiously, the so-called social news website Mothership has also been consistently getting access equal to that of the MSM.

What this amounts to is that accredited “local media” outlets — code for SPH and Mediacorp — are given wide access to government press releases, speeches, events and officials. Foreign media outlets, including highly respected players like CNN, BBC and the Financial Times, are only ever given limited access to the same.

For example, it is not uncommon for a press statement to be sent out to foreign media outlets only hours after the MSM have broken the story. And during the recent general election, the ruling People’s Action Party (PAP) called a virtual press conference on the penultimate day of campaigning that was streamed online, but closed to foreign media.

If access is requested to a particular event or press conference, the standard excuse given by the various agencies: “local media only” or, incredulously, “no space.” Combine this with the lack of our own Freedom of Information Act, and it often makes reporting in a timely and accurate fashion more than a little challenging.

And this is not even taking into account the defamation laws and the hugely controversial anti-fake news legislation called the Protection against Online Falsehoods and Manipulations Act, or POFMA, which can be used to force the placement of correction notices by individuals and groups. In uniquely Singaporean parlance, POFMA has even become a verb. In fact, my employers, Yahoo News Singapore, were POFMAed in January over an article from one of its providers.

All this means that journalists in Singapore, particularly foreign nationals, can sometimes find themselves treading on thin ice. The Republic is no North Korea, but there are a myriad of bureaucratic and legal ways for reporters to get tripped up.

But there has been a game changer — of sorts — in the shape of the coronavirus pandemic. With the eyes of the world watching, the multi-ministry taskforce on COVID-19 has held regular briefings for both local and foreign media since late January. It is almost unheard of in this country: top ministers and officials patiently and transparently answering queries from the media, affording them an unprecedented level of access to a notoriously thin-skinned government. For possibly the first time ever, some of the press conferences have even been broadcast live, with foreign media outlets being picked to ask questions on a regular basis.

And despite subsequent negative publicity over the government’s handling of the foreign worker dormitories, where thousands have been infected with the virus, the foreign media has not been shut out, and the government has continued to answer queries.

But plus ca change, plus c’est la meme chose — the more things change, the more they stay the same. On 11 July, the day after an election where the PAP suffered historic losses, Home Affairs and Law Minister K Shanmugam, a party heavyweight, promised a period of “soul searching and reflection” for the PAP.

Just a week later, the PAP called a press conference to present their first postmortem of the election results — but only to party activists and the MSM.

Evidently, the soul-searching process is going to take a while more. 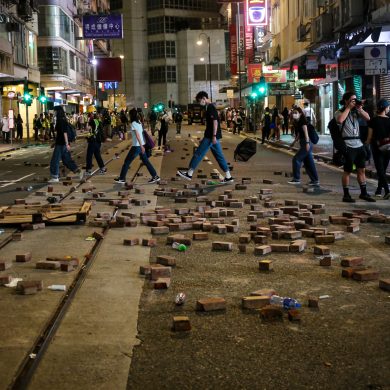